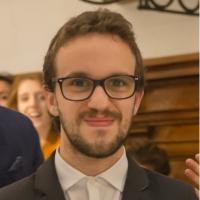 From 2013 to 2018 I was a Fellow (now Alumnus) of the Almo Collegio Borromeo of Pavia. In 2018 I spent a visiting period at the Central European University, in Budapest, and at the University of Cambridge. In 2019 I graduated at the University of Pavia with a thesis on The Notion of Intentionality and its Relevance in Contemporary Philosophy of Mind, under the supervision of Professor Luca Vanzago (University of Pavia) and Professor David Weberman (Central European University). In 2019 I attended the Summer school in ‘Phenomenology and Phenomenological Philosophy’, hosted by the University Ca’ Foscari of Venice, and the one in
‘Phenomenology and Philosophy of Mind’, hosted by the University of Copenhagen and the Center for Subjectivity Research. I also had the occasion to present my work at the 93rd Joint Session of the Aristotelian Society and the Mind Association. From September 2019, I was enrolled on a Master of Arts in Consciousness and Embodiment at the University College Dublin.

In 2017, attending some lectures on Martin Heidegger’s Kant und das Problem der Metaphysik (Kant and the Problem of Metaphysics) I developed an interest for the phenomenological tradition, as well as for the notion of Intentionality and its relevance within the contemporary debate on “the mark of the mental”. I am also interested in the phenomenology of the embodied subjectivity and the contemporary metaphysical accounts of the nature of consciousness and its role within the physical domain. I have a collateral interest for the history of philosophy overall.