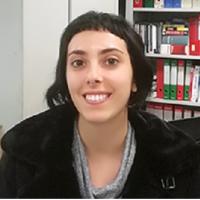 In the a.a. 2017/2018 I achieved the Bachelor’s Degree in Biological Sciences at the University of L’Aquila, with a thesis entitled “Functional selectivity and the molecular mechanism of Lysergic acid diethylamide (LSD)”, through which I explained the conformation and the molecular mechanism underlying the formation of the complex between LSD molecule and serotonin receptors. In the a.a. 2020/2021 I achieved the Master degree in Molecular Biology and Genetics at the University of Pavia, with a thesis entitled “Expression, purification and characterization of antigen5-3, a salivary protein from Aedes albopictus”. Antigen5-3 is a exclusive female mosquito salivary protein, which role, still not clear, is presumably related to the coagulation cascade inhibition at the site of bite and to the enhancement of flaviviruses infection once internalized in cells. The relevance associated to this research is the clarification of  mosquitoes hematophagous behaviour, considering the important role of A. albopictus as human pathogens vector.

Since the first year, my PhD research activity at the Armenise-Harvard Laboratory of Structural Biology, under the supervision of professor F. Forneris, was entirely focused on the understanding on two proteins found in the complex cocktail represented by the Aedes albopictus saliva.
Female mosquito saliva, indeed, plays an important role in the blood feeding behaviour, modulating the haemostatic, inflammatory and immunitary responses of the vertebrate host. Moreover, many active saliva proteins modulate the transmission of vectored pathogens, such as viruses and protozoa (for example, the malaria Plasmodium). The first target of my work is antigen5-3 (aaAG5-3) protein, in continuity with my master internship thesis work done in the Armenise-Harvard Laboratory.
aaAG5-3 protein belongs to the Antigen-5 proteins family, ubiquitously present in hematophagous Diptera, whose function is not clear. Based on precedent reports on similar protein distantly related species, it is postulated that these proteins might be linked to heparin and divalent ions binding (in vitro). Furthermore, it is known that these proteins promote flaviviruses (Dengue and Zika viruses) transmission in vertebrate hosts bitten by infected mosquitoes. Given this, my project on the study of this saliva component relies to an innovative approach which sets the very initial grounds for the molecular characterization of aaAG5-3, from the structural and biophysical points of view, possibly to provide important insights for future developments aiming at controlling vector species and viral spreading.
I optimized the strategy to scale-up aaAG5-3 recombinant production using E. coli T7 Shuffle K12 cells, to achieve an amount of protein suitable for the study. I finally reached 4-5 mg of protein per liter of E. coli culture. The purification steps foresee affinity chromatography techniques based on the presence of the polyhistidine SUMO-tag fused to aaAG5-3. This purification strategy is based on immobilized metal affinity chromatography (IMAC) : proteins bearing a polyhistidine tag are retained on a resin with immobilized nickel ions, while untagged proteins cannot take part in this interaction. After tag removal using SUMO protease in dialysis, the protein was further purified using a reverse-IMAC step to separate the protein from the cleaved tag. The protein collected from reverse-IMAC was then submitted to Size exclusion chromatography (SEC), carried out to polish aaAG5-3 from contaminants. At the end, the pure aaAG5-3 samples could be used for structural and biophysical studies.
BIOPHYSICAL STUDIES: I explored the possible aaAG5-3 binding activity of divalent ions, through the Differential Scanning Fluorimetry (DSF). I found a relevant interaction with calcium, which positively shifts aaAG5-3 unfolding temperature of 7 °C, helping the protein stabilization during the temperature gradient.
To clarify this phenomenon and to understand aaAG5-3 behaviour in solution, I tested aaAG5-3 with several divalent ions through multi-angle laser light scattering (MALLS) technology. No changes in the molar mass of the protein were detected. I also had the opportunity to set up a Small Angle X-ray Scattering (SAXS) experiment at ESRF, which confirmed the globular monomeric state of aaAG5-3 and its reduced flexibility in presence of calcium, providing orthogonal evidence for metal ion-induced stabilization.
I also exploited numerous crystallization conditions to identify the most promising ones for aaAG5-3 crystals growth. After extensive screening, I identified one condition yielding protein crystals suitable for diffraction experiments and I am currently optimizing crystal growth  through different strategies. Based on current results, I expect being able to determine aaAG5-3 crystal structure during the next year of my PhD.

The other target I am working on newly-discovered A. albopictus saliva protein known as Labrum-Interacting Protein from Saliva-2 (LIPS-2). In collaboration with Dr. P. Gabrieli at the University of Milan, I started working on the LIPS-2 project to validate the interaction between the salivary protein with a cuticular protein found in mosquitoes labrum tip, named Cp19. The interaction probably is involved in the activation of the probing mechanism and in the morphological modification of mosquitoes labrum. LIPS-2 is a globular monomeric protein exclusively found in female Aedes mosquitoes sialome, required for the activation of labrum probing mechanism, through which mosquitoes search and find blood vessels inside the hosts skin.
To understand the basis of LIPS-2 and Cp19 interaction at the biophysical level, I had to establish an expression and purification strategy for Cp19, a challenging task considering the limited information regarding insect cuticular proteins. After extensive testing, I developed a protocol based on recombinant expression in E. coli T7 Shuffle K12 cells followed by customized purification techniques to obtain the highest possible yield for subsequent biophysical assays and structural investigations. The maximum yield obtained was 340 ug/L. It should be noted that the purification strategy for this cuticular protein required a lot of optimization , due to Cp19 low expression levels, precipitation at relatively low concentration, and its ability to interact with multiple matrices of the resins used during the purification procedures.
I used purified Cp19 and LIPS-2 to set up several tests, among which a MALLS coelution experiment, to see any molecular mass change after the incubation of these two proteins. This experiment showed a molecular mass change possibly related to the coelution of the two proteins, however a better investigation on this is required to confirm this preliminary data.
Different independent experiments confirmed the actual interaction between LIPS-2 (GFP tagged) and Cp19, with a Kd in the nanomolar range. The best data I obtained on the interaction between LIPS-2 and Cp19 could be collected using Microscale Thermophoresis (MST). The specificity of the interaction was also tested by using a C-terminal deletion mutant of Cp19, named Cp19ΔC, which I expressed and purified with a yield of 450 ug/L. Indeed, Cp19ΔC showed no binding with LIPS-2, indicating the central role of Cp19 C-terminal region in the interaction, something also confirmed by the positive binding data relative to LIPS-2 and the only synthetic Cp19 C-terminal region. By now, I am already planning other strategies to confirm unequivocally the MST interaction data obtained so far, opening myself to a new and inspiring year of research.