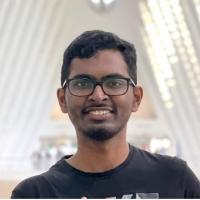 Sagar has graduated from the Indian Institute of Technology Madras with M.Tech and B.Tech in Civil engineering under dual degree program in 2018. Currently, he is enrolled as a PhD candidate in University at Buffalo with the concentration in the Structural and Earthquake Engineering. His Master’s thesis was investigating the changes in the dynamic response of the vehicle pavement coupled system when the top layer of the pavement, asphalt is modeled as a viscoelastic material. A brief study on the influence of temperature on the response of the system was also conducted. Sagar’s PhD thesis is based on building an analytical model of a suspended acoustic ceiling, that could accurately capture the suspended ceiling behavior subjected to seismic loading. Utilizing this analytical model fragility curves for various configurations of the suspended ceilings will be derived. These fragility curves are employed to quantify the risk and economic losses in an event of an earthquake. Sagar shall be working closely with the IUSS Pavia during the time of his thesis.