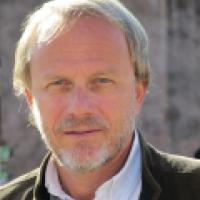 Gian Michele Calvi (1957), is Professor at the IUSS Pavia, Italy, Adjunct Professor at the North Carolina State University.
He received a Master of Science from the University of California, Berkeley, a PhD from the Politecnico di Milano and a Honorary Doctorate from the University of Cujo, Mendoza, Argentina.
He has been the founder of the Eucentre Foundation and of the ROSE School; he has been a member of the Board of Directors of the GEM Foundation and is one of the Directors of the International Association of Earthquake Engineering (IAEE).
He is author of hundreds of publications and of two major books: Seismic design and retrofit of bridges (with M.J.N. Priestley and F. Seible, 1996) and Displacement-Based Seismic Design of Structures (with M.J.N. Priestley and M.J. Kowalsky, 2007).
He has been designer, consultant or checker for many structural projects, including the Rion-Antirion cable stayed bridge (2883 m, in Greece), the Bolu viaduct (119 spans, in Turkey) and the new housing system after L’Aquila earthquake (2009), with 185 buildings seismically isolated with more than 7,000 devices, completed in about six months.
He is associate editor of the Journal of Earthquake Engineering (Taylor and Francis) and has been invited keynote speakers in tens of conferences, including two World and four European Conferences on Earthquake Engineering.
He has been active in conceptual innovation in seismic design, focusing on masonry in his early days, on bridges, displacement–based design and seismic isolation from the nineties.